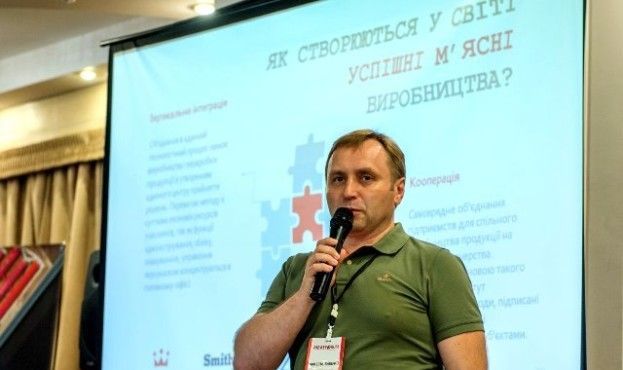 Ask a question
Our Experts will answer your every question about services
08.09.2020

The issue of raw material safety in 2021 will not bypass any domestic meat processing plant. In recent years, the number of pigs has been declining, setting a new anti-record every year, artificially created shortages of raw materials and high prices for it. The enterprises of the Meat Industry Association could not stand aside. The association creates conditions for everyone to earn many times more. This opportunity arises with the implementation of the meat development program "New Pig 2025".

Mykola Babenko, General Director of “The Centre for improvement of animal breeding”, CEO of the Meat Industry Association, spoke in detail about the development of the pig industry in Ukraine in the agro-blog AgroNews.UA.

We are talking about the formation of a favorable investment climate in pig farming, the development of existing pig farms and the creation of new ones, and meat processing companies have the opportunity to take care of their own raw materials through vertical integration or cooperation.

“The practice of vertical integration is new for Ukraine. So far, there are few successful examples, but they already exist, and that's great. There are enterprises to focus on in Ukraine, whose successful experience to use” said Mykola Babenko, CEO of the Meat Industry Association, during a recent Meat Forum conference in Kyiv.

The largest pig businesses in the world and already in Ukraine are engaged in both breeding and processing. Niva Pereyaslavshchyny also announced its plans to join the leaders with its own cultivation and slaughter - APK-Invest and Globyno.

The reduction in the supply of live pigs from the third largest producer of pigs will have impact on meat processing plants, as the shortage of raw materials will become even greater, so the development of pig farming is on time.

The advantages of cooperation include a unified system of planning, accounting, feeding, treatment, procurement and sales, etc.

The main task of the cooperative is to create standards for all participants, compliance with which will allow to have the lowest cost at high quality. We form uniform rules that will benefit both those who raise pigs and those who process through the cooperative.

Among the vertical ones are two businesses of the members of the Meat Industry Association: Ternopil and Myrhorod meat-packing plants.

Global demand for pork is growing. China imported 2.7 million tons of pork in the first six months of 2020, almost as much as in the whole of 2019.

In fact, the current situation is favorable for the pig farming business, the cost of pig farms has decreased, competition among pig farmers has decreased, and the price of pigs is one of the highest in the world. If you remove the overspending, bring the cost of cultivation to normal, the domestic consumption of pork can be at least doubled.

Investors and businesses should not be afraid of pig farming and widespread stories about the "insurmountable difficulties of this business." Yes, objectively there are overspending and the cost of more than 40 UAH per 1 kg of live weight, there are many factors that do not allow to reduce it to the standard 25 UAH / kg.

That is why we launched the program "New pig 2025" to create conditions in Ukraine for the lowest cost in pig breeding in the world, to remove all obstacles to it.

It will be recalled that the Meat Industry Association announced an ambitious investment project to revive pig farming in Ukraine and initiated a 5-year program to support the development of pig farming in Ukraine "New Pig 2025". It aims to stimulate the breeding of pigs for the needs of the meat industry of Ukraine up to 20 million heads at a time and more.

Order the service
Place an order online, we will contact you soon and will answer questions that interest you
Share link:
Back to news