Use of acidulants in pig and poultry farming

According to most experts, the use of organic acids in pigs and poultry is efficient and economical. Due to the improved hygiene properties of feed and drinking water, digestion of animals is increased, their gastrointestinal microflora is stabilized.

Consumers decide independently in what form to apply acids (in liquid or in the form of a powder). But it is necessary to understand that while taking a decision, an important factor is the right combination of acids in products.

Organic acids are a special group of chemical compounds containing one or more residues of the carboxyl group (-COOH). Only a part of organic acids finds rational use in feeding animals.

It is mainly about short-chain compounds, which can be quickly absorbed in the digestive tract. These include, for example, formic, propionic, lactic, oily (more often in the form of salts and esters), citric, fumaric and sorbic acids.

Acids and their properties

Organic acids used in agriculture are distinguished by their properties: pH-lowering or affecting microbes, administered in liquid or dry form, having volatility, corrosive activity, odor, taste, safety level for animals and humans, and many others.

Lactic acid is a liquid acid, which, in comparison with the formic, does not have volatility and has extremely low corrosive activity. Its positive properties are a strong antibacterial action, a decrease in the pH index, in addition, it stimulates animal feed intake. As in food, lactic acid is very valuable for acidification, especially in piglets' feeds.

Lemon and fumaric acids are dry foods without a strong odor. Although they have a very limited antimicrobial effect, they are used to lower the pH value in piglets' feed. Sorbic and benzoic acids are also dry products and have a powerful effect on molds, bacteria, and yeast. 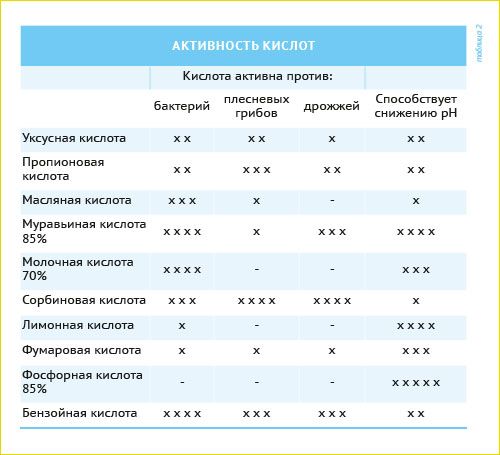 Different monoacids have different properties, so their use must be carefully studied and calculated in each specific case. Combining the best properties of acids, one can achieve a synergistic effect and an almost perfect impact on bacteria, molds, yeast, etc.

All acids have a common property: they can lower the pH index, as a result of which microorganisms lose their ability to reproduce or die. However, the property of reducing the pH in different acids is different, it depends on the size of the molecules, as well as the degree of dissociation, i.e. Release of the H + ion in an aqueous solution.

Each acid has its own acidity constant pK. It is the pH value at which the acid exists at 50% as acid and 50% in an active, dissociated form. Some acids have several acidity constants pK, for example, citric and fumaric. All these acids differ in chemical composition and therefore have different properties and methods of action.

Along with the decrease in pH, acids suppress the vital activity of bacteria, the development of yeasts and mold fungi. For example, formic acid has a strong antibacterial effect, it destroys salmonella and E. coli, stops the growth of yeast, which is especially useful in the liquid type of feeding animals.

Propionic acid suppresses the growth of mold fungi and yeast and is therefore often used in the conservation of grain, to prevent the formation of mold and yeast in the feed.

Antimicrobial action is an important property of organic acids, which can be described as follows: acids penetrate the cell membranes of microorganisms and split into anions and cations. Cations lower the pH value and activate chemical reactions, while the microorganism is killed due to energy loss.

Anions affect various biochemical reactions, causing the microorganism also to die (for example, the assimilation of amino acids is blocked and cellular biochemical reactions stop). The effect of acids occurs simultaneously in several directions.Unlike antibiotics, bacteria do not produce resistance against organic acids, Which significantly (for the better) improves the chances of their use in livestock.

The use of acids in water or feed is a well-proven tool in the prevention of salmonellosis.

The success of the use of acids in maintaining the hygiene of water depends on their concentration, dissolution rate, water hardness and their property to lower the pH index. Unfortunately, not all bacteria are equally susceptible to the antimicrobial action of individual organic monoacids.

Only due to a competent combination of several organic acids one can reach the maximum level of productivity. It should be noted that in the poultry industry the use of acids in drinking water is a proven method of suppressing Salmonella.

Any action of acids used in feed or drinking water affects the digestive processes in the body of the animal and poultry. Due to the acidification of chyme in the stomach of pigs or cinders of birds, they notice a significant improvement in digestion (hydrolysis of proteins, normal activity of digestive enzymes is maintained).

Thus, in addition to the hygienic purpose of the use of acids, manufacturers receive additional prevention of digestive disorders in animals and birds. At the same time, due to the stabilization of the acid barrier of the stomach, the microorganisms enter the small intestine, and a beneficial effect on the beneficial microflora is obtained.

However, it is worth keeping in mind that too high concentration of some acids can worsen the state of useful microflora (primarily lactic acid bacteria).

The combination of various acids (preserving and inhibiting the growth of microorganisms) is very suitable in feeding pigs because The secretion of hydrochloric acid after weaning is still insufficient. Natural until the moment of weaning acidification in the stomach (contained in lactose colostrum, hydrolyzed to lactic acid) is significantly reduced.

Due to the addition of appropriate acids in the feed, the pH in the stomach is normalized, which stabilizes digestion.