Streptococcosis is an infectious disease, mainly suckling pigs and weaners, caused by streptococci and characterized by septicemia, polyarthritis, meningitis, lag in growth and development.

In recent years, streptococcosis in suckling pigs has become the most common bacterial infectious disease, in some cases, ahead of, according to our observations, even coliinfection. A particular problem with streptococcosis is found in modern farms, complete with animals imported from Europe.

This is facilitated by two factors. First- High carrier in animals. (According to Z. Peisak, 2008 - 100% of swine carriers of streptococcus in tonsils). And second, the most important, the transfer of piglets to a completely slatted floor, which helps to injure the limbs.

According to literature sources, the pathogen of the disease is the bacterium Streptococcus suis serotype 2. More rarely serotypes 1-8. Table 1 shows the manifestation of streptococcosis independence of the serotype of the pathogen.

Table 1. Streptococci and the forms of clinical manifestation caused by them

As can be seen from the information presented in Table 1, the variety of pathogen variants in the etiology of streptococcosis causes several forms of the disease and makes one think about the difficulties of specific prevention.

Streptococci are relatively stable in the external environment, but, on the other hand, are very sensitive to any disinfectant in the most usual concentrations.

The source of the causative agent of infection is mainly sows bacterium carriers. Thus, our studies showed that out of the milk of sows with mastitis, streptococci were isolated in 46.2% of cases, from outflows in the endometrium in 48.1% of the samples taken.

Gates infection in newborn piglets in most cases was a stump umbilical cord and umbilical blood vessels, as well as a pharynx for alimentary infection. Pigs of any age have damaged skin and soft tissues, mainly in the limbs and head region (Figure 1). Systemic diseases involving the infectious process of the brain, lungs usually occurs with oral infection. In such cases, septicemia also occurs.

We summarized the results of our own research conducted in several pig farms in 1980-2010. In 1980-1990, streptococcosis was manifested in piglets of suckers in the form of streptococcal (dipococcal) septicemia, umbilical sepsis and in piglets on growth - streptodermia. 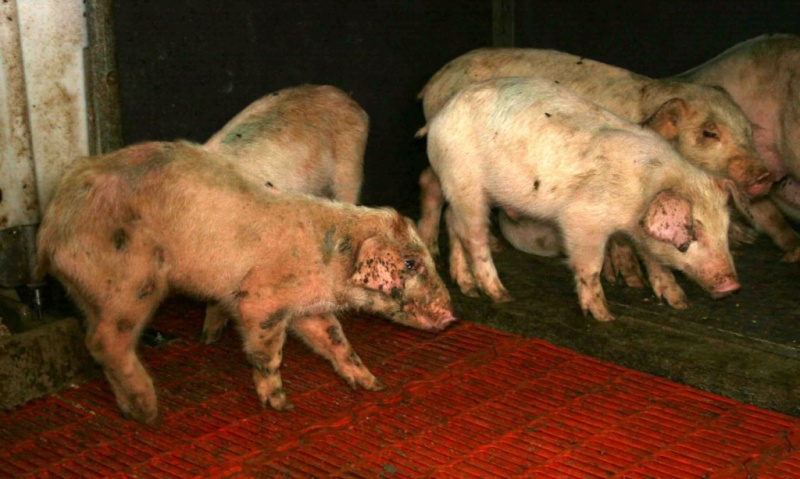 Streptococcal septicemia may be present in suckling piglets in the first 2-3 weeks of life. In piglets, body temperature rises to 41º-41.5ºС. Oppression is observed, the piglets acquire a yellowish color and die very quickly. This form of streptococcosis is often recorded in pig complexes with native pigs. On complexes with imported pigs of new selection, this form is practically not observed.

Detect it at the dissection from the inside of the abdominal wall, at the exit point of the umbilical vessels. In this case, there may be peritonitis in different stages of development (Fig. 2). 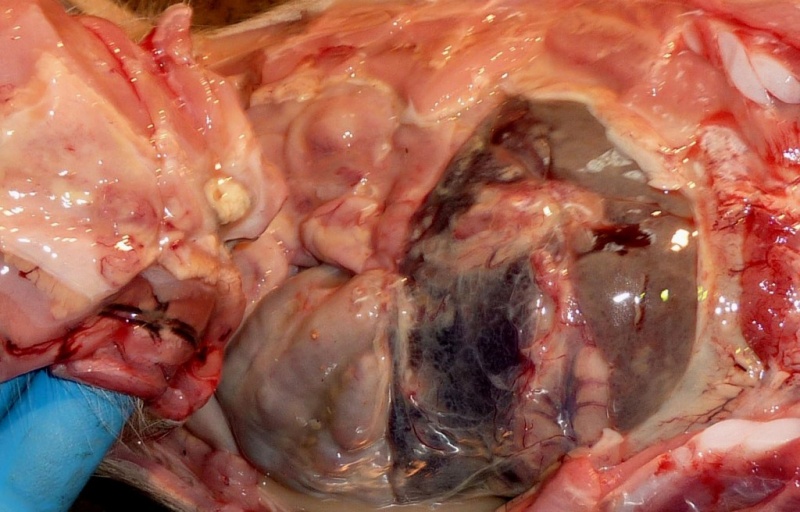 The focus of inflammation may be quite small, but it is enough to cause septic process and the death of the animal.

At pigs on доращивании, at a lack of zinc, happens, parakeratosis develops which is very often complicated strepto-staphylodermia. However, recently, streptoderma began to manifest itself without parakeratosis, and in some cases even as a secondary infection in swine fever.

On modern farms, on the pig's new genetics, streptococcosis manifests itself in the form of systemic joint injuries and meningitis.

The articular form is characterized by single or multiple lesions of the joints (Figure 3). 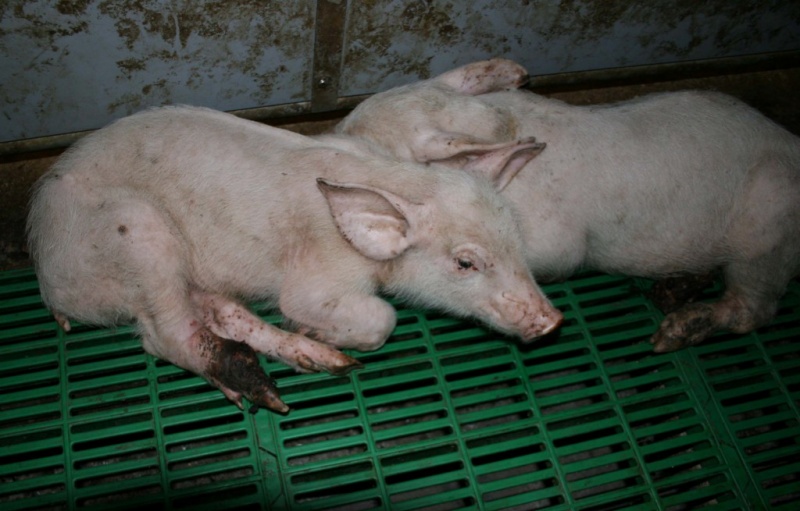 In piglets, from the age of 18-20 days, streptococcosis often manifests itself in the form of meningitis. There is a violation of coordination of movement, paresis of the hind limbs. Then the animals lie on their sides, with their heads thrown back and making swimming movements, which is typical for Aujeszky's disease (Fig. 4). 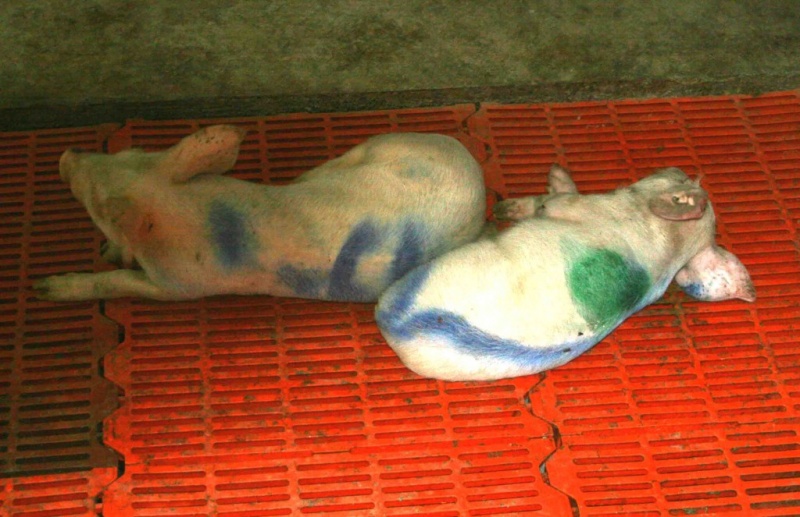 When autopsied dead piglets, in the case of septic streptococosis, a "septic" spleen is found, which occupies almost the entire abdominal cavity. The spleen is strained, so-called "rubber", dark cherry, almost black in color.

In subacute and chronic processes, fibrinous pericarditis, congestion of the fluid in the thoracic cavity, pleurisy is possible.

With a latent form, we establish serous-purulent inflammation of the joints, while in the nervous form - serous-purulent meningitis. In subacute cases, tendovaginitis (Fig. 5) and ulcers in the internal organs are typical (Fig.6) 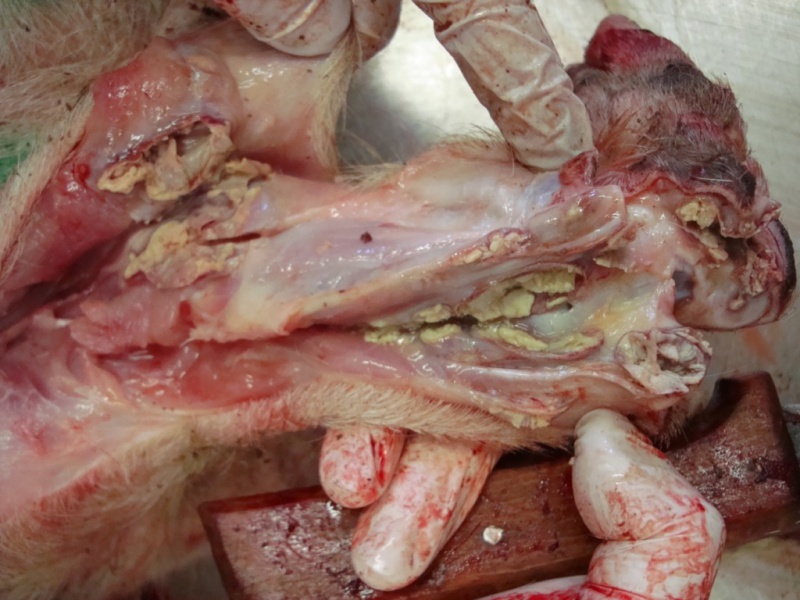 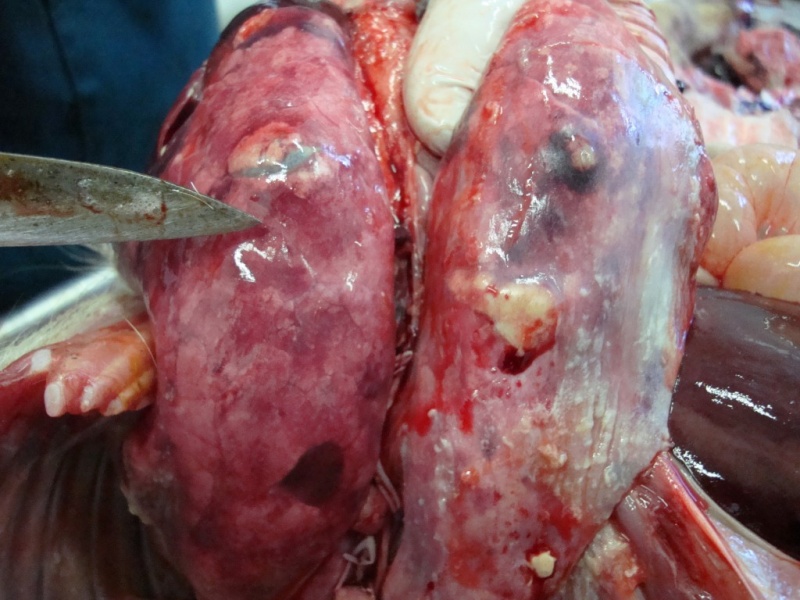 In 2010, at one of the pig complexes, there were manifestations of streptococcosis in the form of hemorrhagic lymphadenitis in newborn piglets.

The disease developed on farrowing for several months, and it began with the occurrence of individual cases of edema of the pharynx in piglets of the first three days of life. Pigs perished from suffocation. Since the cases were isolated, they were not given much importance. But then the pathology acquired a mass character, and the departure of piglets reached 50%.

The rapid occurrence of edema and the absence of a temperature reaction led to speculation about the allergic nature of the phenomenon. However, the introduction of antiallergic drugs did not have the desired effect, and the clinical picture began to develop immediately after the birth of piglets. The use of diphenhydramine in the development of edema made it possible to prolong the life of newborn piglets to 5 days and to obtain further development of the pathological process.

During the autopsy serous-hemorrhagic infiltration of tissues in the pharyngeal region and (Fig. 7,8) a picture of acute hemorrhagic lymphadenitis of the neck nodes (Fig. 9, 10) of fibrinous pericarditis and pleurisy (Fig. 11), as well as pneumonia (Fig.12), That allowed to assume the diagnosis: streptococcosis. Initially, the manifestation of the disease was questioned - literally right after birth. 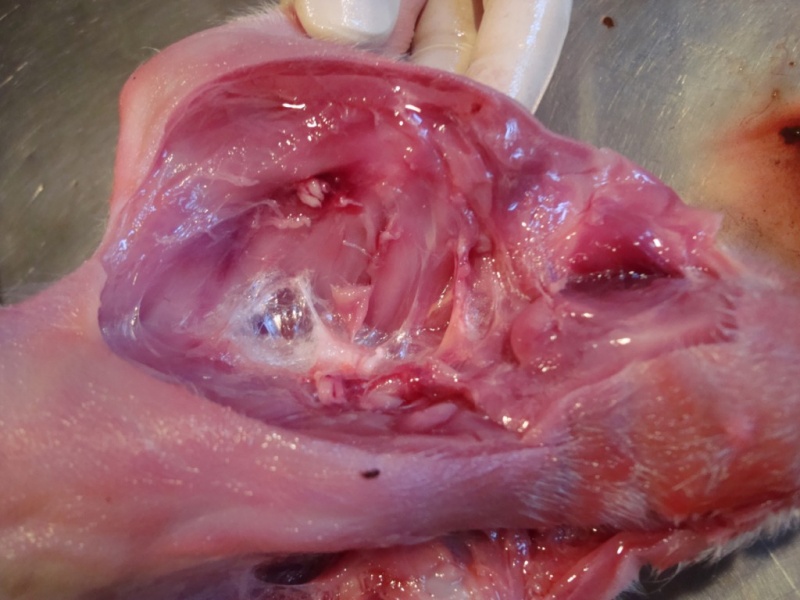 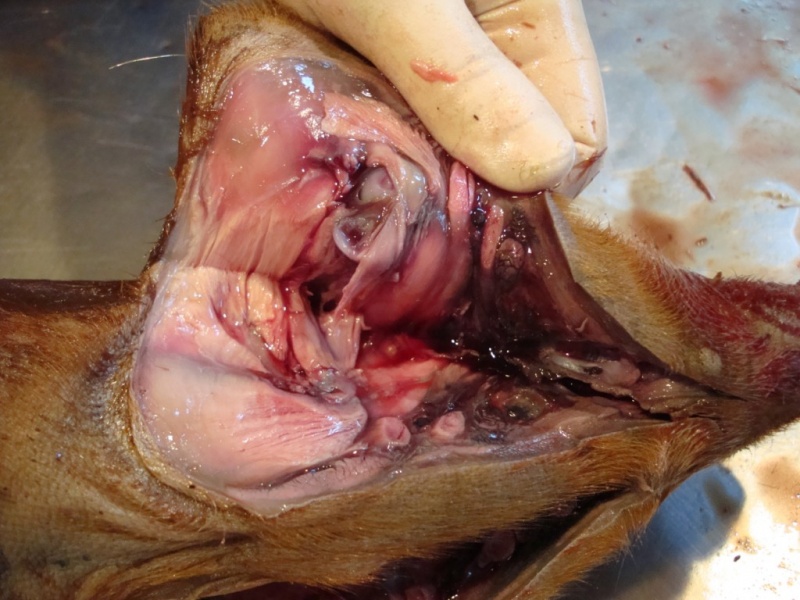 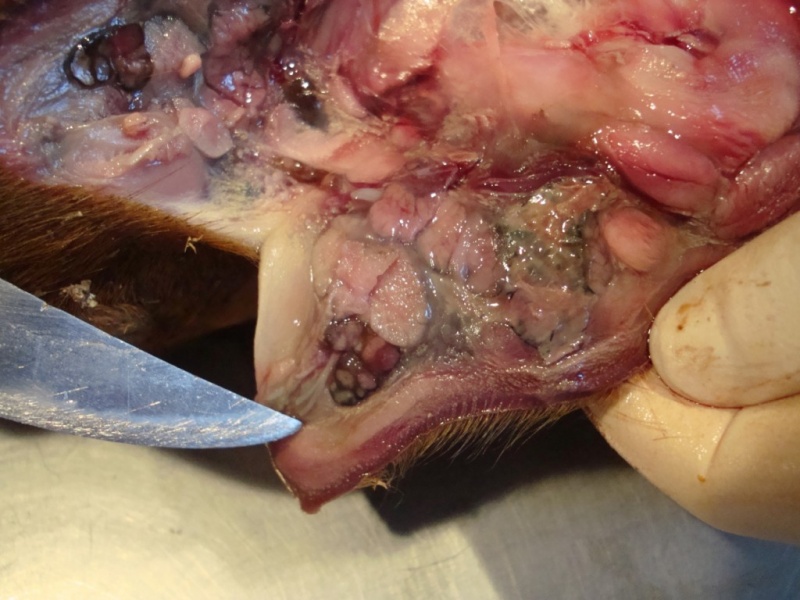 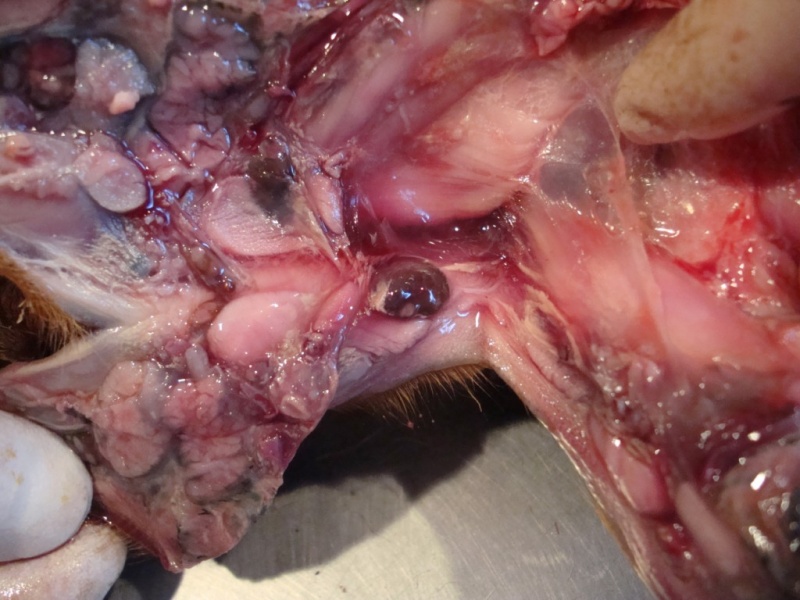 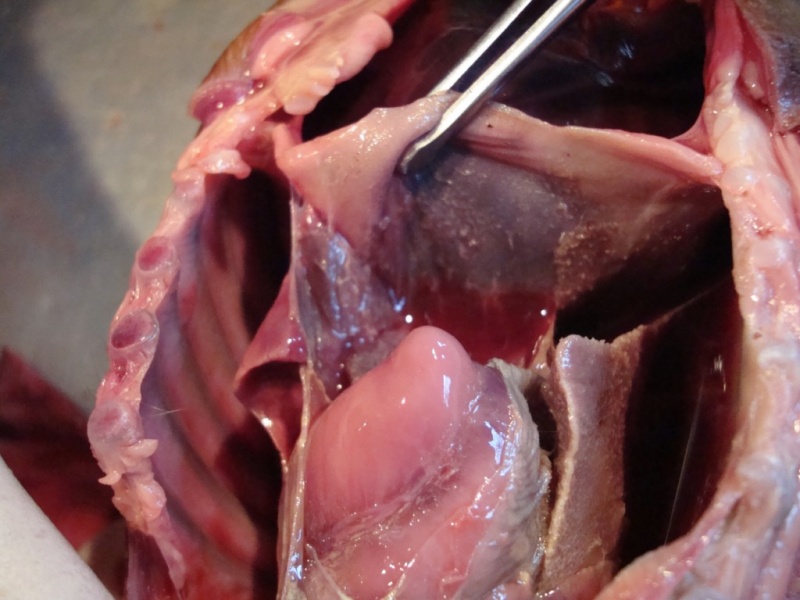 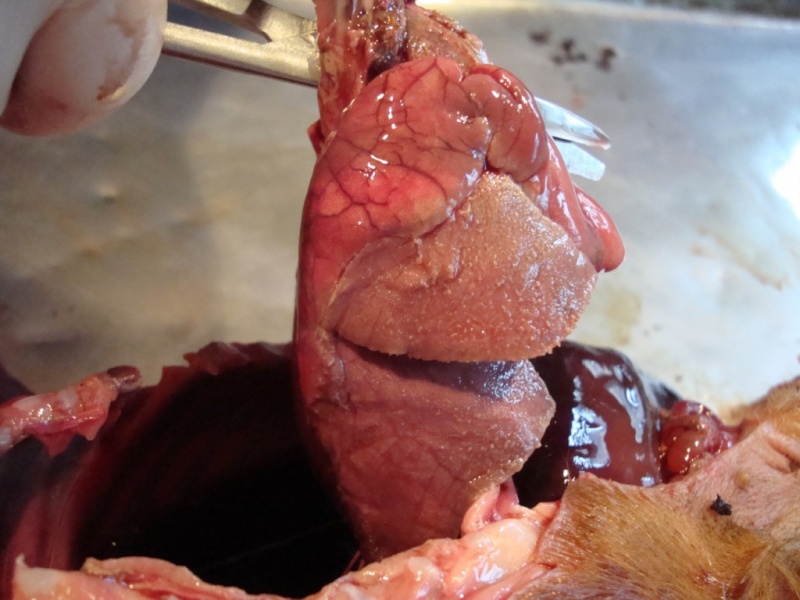 Unfortunately, the possibilities of the territorial laboratory did not allow typing of the isolated cultures of streptococci.

In general, the diagnosis is clarified on the basis of the bacteriological method of diagnosis when isolating the pathogen from the affected organs. The PCR is used.

On pig farms when kept on crevice floors for the purpose of preventing streptococcosis, the piglets at birth are closed with a strip of adhesive plaster (Fig. 13). 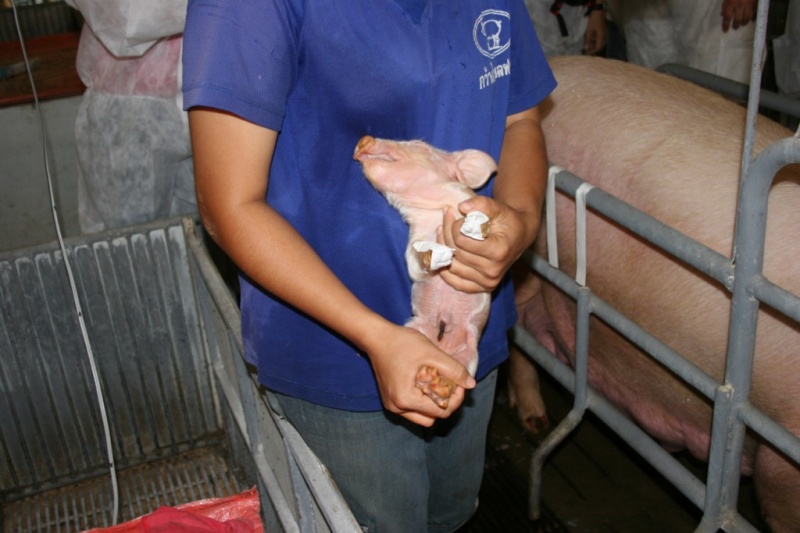 Indeed, such a simple measure allows you to almost completely get rid of arthritis piglets-suckers.

In European countries, immunization is used against streptococcosis, often with autovaccines.