Peptides in the feeding of farm animals

From a traditional point of view, it was believed that the protein can only be absorbed in the form of free amino acids.

In 1953, for the first time, it was found that the dipeptide can completely, without splitting into individual amino acids, pass through the wall of the intestinal epithelium. Further scientific researches have shown that the absorption of small peptides (di- and tripeptides) is accomplished by a specific mechanism (PEPT1) And, most important, more efficiently than the absorption of the corresponding amino acids. 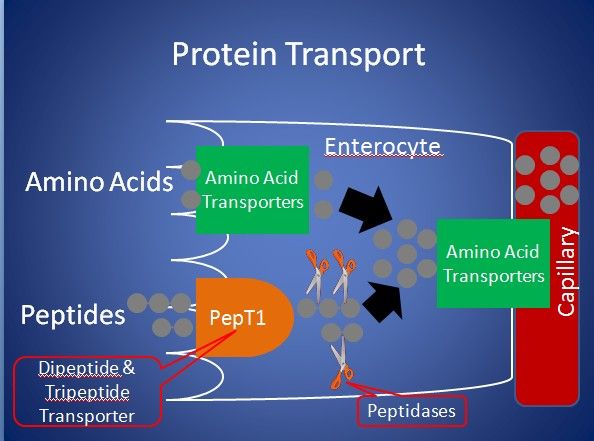 Thus, PepT1 is able to transport all 400 di- and 8000 tripeptides, which are the result of possible combinations of 20 proteinogenic amino acids. Thus, 2 or 3 amino acids are transported to the cell by means of PepT1 with the same energy inputs as one free amino acid, energy required for peptide uptake is 2-3 times lesser than for amino acids.

Peptides- organic substances consisting of the remains of identical or different amino acids, connected by a Peptide bond.

Both economically and technically, the most effective way to produce fodder small peptides is enzymatic hydrolysis, which uses special enzymes to release inactive amino acid chains (di- and tripeptides) from protein molecules, allowing them directly to provide immunostimulating, antioxidant and antimicrobial effects In the body of the animal. In contrast to classical fermentation, this technology makes it possible to achieve the highest possible content of small peptides and the complete absence of anti-nutritional factors.

For more than 30 years, it has been known that peptides are a critical factor in mobilizing the immune system against the external infections. Adaptive immunity uses memory and specificity as a protective mechanism, and innate immunity is the first "line of defense" against infections consisting of antimicrobial peptides (HDP).

HDPs act not only through the cytotoxic mechanisms, but also have an immunomodulatory effect, for example, by suppressing cytokines that cause inflammatory processes. In addition, HDPs affect the adaptive immune system, stimulating the B- and T-cells response. This effect of small peptides increases the resistance of animals to diseases and improves the safety of livestock.

The production of peptides by enzymatic hydrolysis is the most promising method for the formation of protein antioxidants since peptides have higher antioxidant activity than whole proteins. Glutathione, due to intensive scientific research, is the most famous small peptide, is considered almost the main antioxidant in the body.

It has a much stronger antioxidant effect than other antioxidants. The only problem is that the animal's organism produces glutathione in small amounts, which are quickly consumed to protect against oxidative stress.

The enzymatic hydrolysis technology allows the release of significant amounts of glutathione and other antioxidants from plant proteins, which increases the productivity and safety of animals.

Having become widespread in medicine and food industry, small peptides are already widely used in feeding in the countries of North America, Europe and South-East Asia. At the same time, the issue of the use of small peptides on the Russian food market is relatively new.

On the basis of a profound scientific research, an optimal ratio of amino acids, protein, and peptides in the structure of the crude protein of the feed was developed, which confirms the need to take into account the content of small peptides in the calculation of rations.

Small peptides, performing a number of important biological functions in the body, are not just an alternative to highly digestible protein sources, but also allows achieving a number of additional effects on the productivity, safety, digestibility of other nutrients.

At the moment, the only source of small peptides produced by enzymatic hydrolysis from cotton protein - the feed additive "Fortid" from Mytech, China, is presented in the CIS countries market. The maximum effect of Fortid use is achieved in the feeding of piglets.

Experiments conducted at the company's own farms showed an average increase in live weight by 2 kg in piglets at the age of 70 days. Fortid is successfully used in sow feeding, significantly increasing feed intake, as well as fattening pigs, improving not only the productivity indicators but also the masculinity of the carcass.