Mycoplasmosis of pigs: causes and prevention

Enzootic pneumonia is caused by the bacterium Mycoplasma hyopneumoniae. It is widespread in populations of pigs and is endemic in most herds around the world. It is transmitted either by contact with sick and healthy pigs or by air to a distance of 2.5-3 km if climatic conditions permit.

The bacterium quickly dies in the external environment, especially when drying. In wet conditions, it lasts from two to three days. The incubation period ranges from two to eight weeks. Under good conditions of maintenance and management, the course of the disease without complications does not pose a threat to the body.

However, mycoplasmosis can have more serious consequences in the presence of such diseases as actinobacillus pleuropneumonia (APP), pasteurellosis, hemophilia, PRRS or influenza. Mycoplasmosis always affects the apical and cardiac lobes, sometimes an additional or middle part of the diaphragmatic lobe, causing an increase in the density of the lung tissue up to the soft tissue, hepatic.

If more than 15% of the lungs are affected, it is very likely that mycoplasmosis is present in the population. In herds safe for M. hyopneumoniae, the number of affected lungs is from 1 to 2% and the volume of compacted tissues is very small.

If there is no mycoplasmosis, then the effects caused by other pathogenic microorganisms are greatly reduced. Therefore it is believed that M. hyopneumoniae opens the gateway of infection for other diseases.

The acute form can usually be observed at the first hit of M. hyopneumoniae in the herd. During the period from six to eight weeks after infection, severe acute pneumonia, cough, respiratory failure, fever and high mortality in all age groups are observed. This clinical form is extremely rare and often complicated by other pathogens.

Under normal conditions, the pathogen may persist in the herd for a long period. Maternal antibodies are transmitted through colostrum to piglets and they develop colostral immunity, which lasts from seven to twelve weeks, after which clinical symptoms begin to appear. The disease is accompanied by a long incessant cough, in some animals breathing is difficult and signs of pneumonia appear. 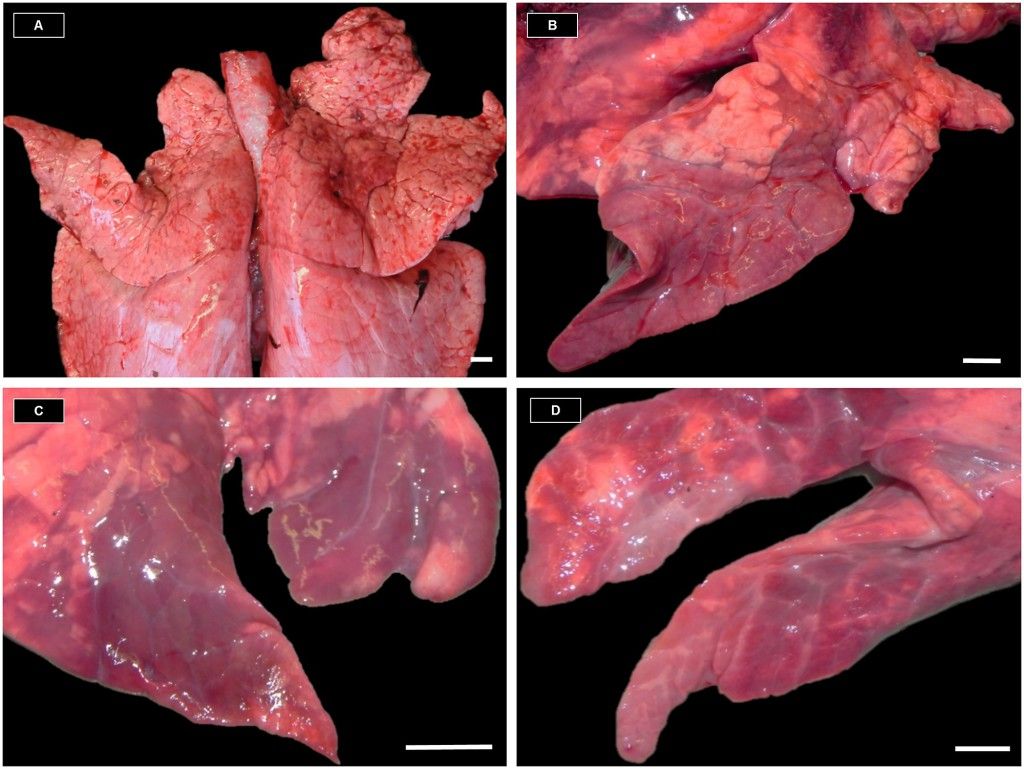 In most cases, the diagnosis is based on a clinical picture and postmortem lung diagnosis in pigs.

For laboratory confirmation, one or more studies are performed: an ELISA test, histological examination of stained lung preparations, a complement fixation reaction, a polymerase chain reaction reaction, an enzyme immunoassay, or isolation of a pure culture of the causative agent.

A slight compaction of the anterior lobes of the lung can be caused by other pathogens, such as: influenza, PRRS, hemophilia, some viruses or other mycoplasmas.

In dysfunctional farms, treatment should be based on the following principles:

Antibiotics only prevent the development of clinical signs but do not release the animal from the pathogen.

The basis for the prevention and improvement of mycoplasmosis is the vaccination of piglets.

The main place in the prevention of the disease is given to veterinary-sanitary and zoogenic hygiene measures. Pigs for the acquisition of farms should be purchased only in well-to-do farms, quarantine them after delivery and carefully investigate to identify mycoplasma carriers.

It is necessary to create optimal conditions for keeping and feeding, to observe the breeding of pigs by cycles, the density of planting, to conduct technological sanitary ruptures when placing animals.

The increase in morbidity is due to:

To control mycoplasmosis and respiratory diseases in dysfunctional farms: