The percentage of coming to the hunt during the first week after weaning is an important indicator of the effectiveness of the complex. This is one of the indicators that affect the number of non-productive days in the herd and the productivity of the sows in the future.

The goal: a minimum of 90%, ideally more than 95% of the arrival in the hunt; The average period from weaning to insemination is 5.5 days.

The volume of energy is 12500-14500 kcal ME /sow/day. Approximately 4-5 kg of feed/sow/day from the first day after weaning. Make sure that the sows received food on the day of weaning. Small feed losses are allowed, they will, especially when the sows start to go hunting and lose their appetite.

In this period, individual approach and dosing of feed is important. In the period from weaning to insemination , t is better to overfeed than to underfeed. It is ideal to use a diet for lacquer sows, where the energy level is higher, the fiber level is lower compared to the diet for pregnant sows.

Sowing energy consumed by sows after weaning is one of the main factors for a timely arrival in the hunt, also it helps to maximize ovulation and reduce the weaning-insemination period. For additional stimulation, additives such as glucose (200 g / head / day) can be used, there are also positive experiments with the addition of starter or pre-starter, full-fat soy or fishmeal.

Effects on sows with the help of an adult boar (12 months +) from the first day after weaning will accelerate the onset of hunting and reduce the percentage of problem sows. Stimulate the sows for the first 2 days after weaning to leave the boar for contact through the fence for a minimum of 2-3 hours per day after checking the sows in the hunt.

Also it is necessary to stimulate the sows at every detection in the hunt. Positive influence on hunting comes with prolonged contact with the boar during the insemination procedure, when in the insemination zone there are still not inseminated sows that did not go hunting (Figure 1). 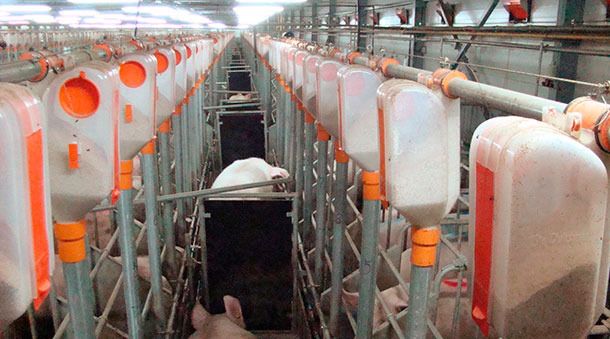 This complex does not use a special zone for insemination, sows are inseminated in the chain where they were delivered after weaning. This excludes the movement of sows in the hunt. Sows can not evenly come in hunting and can be mixed within a week. But there is a clear separation for weeks of insemination.

Sows remain in the insemination zone for 30-35 days, after confirmation of pregnancy they move into the waiting zone into group cells.

The duration of the daylight should be 16 hours of light at the insemination site and the site of the repair pigs (Figure 2). Illumination min 150 lx, ideally 200 lx at sow level. At illumination below 100 lux, a decrease in the farrowing percentage by 1.5% was observed, not coming into the hunt after weaning 15%.

The light regime should not depend on the human factor, it is better to set the time relay for automatic control. Regular cleaning of plafonds helps to maintain the level of illumination in the building.

Figure 2. Not an expensive solution to improve lighting. The height of the lamps (red line) was changed, this allowed to increase the illumination at the level of the repair guinea pigs.

Most sows that do not show signs of hunting immediately after weaning usually go hunting for up to 25 days, sows with physiological or hormonal pathologies may not come in hunting and are subject to culling.

As a result of an increase in non-productive days, the average number of farrowings per sow per year decreases, and, accordingly, the efficiency of the enterprise is lost. Procedures in the weaning-insemination period also affect the farrowing percentage and the number of piglets born.