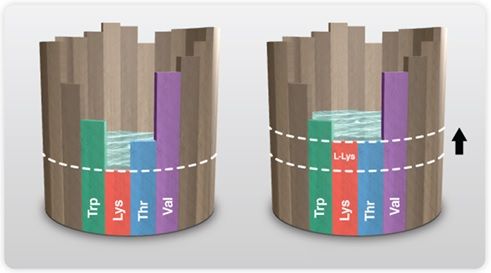 Specialists in pig feeding know well how important the competent amino acid balance of rations is. At present, 20 amino acids are known, ten of which are indispensable for pigs, that is, they can not be synthesized by the body and must be supplied in sufficient quantities with the feed. The most important function of amino acids is to ensure the process of protein synthesis.

When compiling rations for pigs, all the essential limiting amino acids should be taken into account.

Limited LiabilityCalled those irreplaceable amino acids, which are part of the protein feed in the smallest amount in comparison with their physiological needs).

Although the main value of amino acids is protein biosynthesis, however, they perform other functions in the body. These secondary functions should also be taken into account in the formulation of the feed.

In particular, methionine normalizes lipid metabolism, preventing fatty degeneration of the liver, and also promotes the regeneration of liver and kidney cells.

Threonine, Except for participation in the synthesis of protein, is part of the secretion of epithelial cells of the intestine. It was found that only 40% of the total amount of threonine absorbed in the small intestine enters the blood. The remaining 60% is used by enterocytes, primarily goblet cells, for the synthesis of mucin.

Mucin, as the main component of mucus, serves to moisturize the intestinal mucosa, protects it from mechanical damage and the effects of digestive enzymes. Threonine is the most important amino acid in mucin, where it contains more than 16% (whereas lysine is slightly more than 2%).

Threonine is also the main amino acid in the composition of immunoglobulins, where its amount is almost twice as high as that of lysine. Thus, the optimal content of threonine in feeds is necessary not only for the process of protein biosynthesis but also for providing intestinal digestion and the formation of specific immunity.

TryptophanIs the precursor of the hormone serotonin, which, in turn, is involved in the regulation of appetite in animals. It is proved that when feeding wean pigs and lactating sows with diets not balanced in tryptophan, a decrease in feed intake is noted.

In the domestic practice of feeding, pig rations are most often balanced by the total content of amino acids. However, it is known that it is more correct to carry out the formulation of compound feeds based on digestible (digestible) amino acids. This is a common practice in Europe and the USA.

Amino acids of feed in the animals are not fully digested. Only a part of them is absorbed in the small intestine and participates in metabolic processes, affecting productivity. The undeveloped part of amino acids moves into the large intestine and is excreted in feces. The assimilation of amino acids depends on a number of conditions: the component composition of the compound feed, the technology of its production, the presence of anti-nutritional factors.

Therefore, the coefficients of fecal digestibility will vary greatly and are practically unsuitable for the compilation of rations.

Feeds, balanced by the content of AID amino acids, more correctly reflect the needs of pigs. In addition, mixed fodder, balanced by general amino acids, can contain their excess amount. Therefore, the formulation of diets based on digestible aminoacids has a number of undeniable advantages:

The indicator of the apparent availability of amino acids theoretically reflects how much of the amino acid was absorbed by the body as it passed through the gastrointestinal tract. Nevertheless, when calculating the amino acid AID, it is not taken into account that the contents of the ileum include not only the unaltered amino acids of the feed but also amino acids of endogenous origin.

Endogenous losses of amino acids are divided into two groups - basal and specific.

Under basal endogenous losses it is understood that the number of amino acids that will be lost by an animal, regardless of the conditions of feeding. They are established with the content of the experimental group of pigs on a nitrogen-free diet and the determination of the amino acid level in the contents of the distal ileum.

Basal endogenous loss of amino acids is constant for any protein content in the feed. Their correlation is noted only with the level of dry matter in the diet.

However, in real conditions of feeding, specific amino acid losses can make up more than 50% of all endogenous losses. Specific endogenous losses are not constant. They increase when the technology of feed production is violated (non-adherence to optimal pelletizing/extruding conditions), high fiber content, and high content of anti-nutrition factors (especially trypsin inhibitors).

Thus, it is not so effective to carry out the balancing of rations on the basis of apparent ileal digestibility, since endogenous losses distort the value of digestibility. For certain types of raw materials, the value of endogenous amino acids can be established more or less reliably.

But the finished feed consists not of one, but of several components, and it is difficult to predict endogenous losses. In this regard, it is more rational to focus on the value of true ileal digestibility of amino acids.

True ileal accessibility of amino acids shows how much of the amino acids of the food is digested in the gastrointestinal tract. At the same time, endogenous losses of amino acids are taken into account.

The main disadvantage of this indicator is the complexity of determining the specific endogenous losses of amino acids, since, as already noted, they depend on a number of factors. It is problematic to take into account all these factors.

Ileal availability of amino acids for a number of raw components (in particular, oil cakes and meals) largely depends on the temperature regimes used for their production. In addition, the Ileal digestibility of amino acids is influenced by the contamination of the raw material with mold fungi.

Thus, wheat grain, contaminated with microscopic fungi, has a much lower true ileal availability of tryptophan than pure grain (56% and 67%, respectively). These factors (the technology of production of feed, their contamination with molds) must be taken into account when developing the formulation of feed.

Therefore, a correct indicator is the so-called standardized ileal accessibility of amino acids (standardized ileal digestibility – SID), In the determination of which only basal endogenous losses (independent of the level of protein in the diet) are taken into account.

When balancing mixed fodders by amino acids, the standardized illicit availability (SID) of amino acids is preferable to use, since it is not necessary to take into account specific endogenous losses, which are extremely variable and depend on the composition of the feed and the way it is produced.

Currently, the SID levels of amino acids are determined for the vast majority of feed ingredients that are used in the feeding of pigs. In this respect, one of the leading organizations is the French National Institute for Agricultural Research (INRA), which regularly publishes updated data on the coefficients of digestibility of amino acids in the feed.

The regulatory requirements for SID amino acids are known for all sex-age groups of pigs. These values are periodically refined and adjusted in accordance with the achievements of animal husbandry, including through their own research of genetics manufacturing companies.

Combined feed, developed taking into account SID amino acids, more correctly provides the needs of animals. In addition, it has the most balanced value, which is especially important with the current high prices for feed commodities.